towards the new millennium' (90's)

《 Of ' Image,Object,Illusion ' -Off Series Mechanism 》 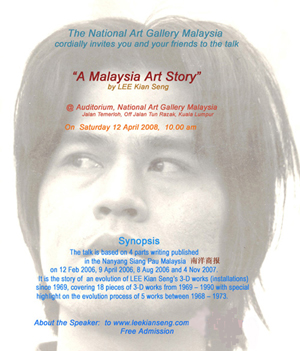 A Malaysia Art Story  (Chinese essays which were published in Nanyang Siang Pau Malaysia in 2006 and 2007. English version currently under construction )

印尼耶加达《Peace, Harmony and One 》（1984） "...the 'fluid strokes' is the motion processed from the root of my Chinese calligraphy...the work is the  embodiment of the strokes and form in our shared  physical and social world "

(note: below  under construction) 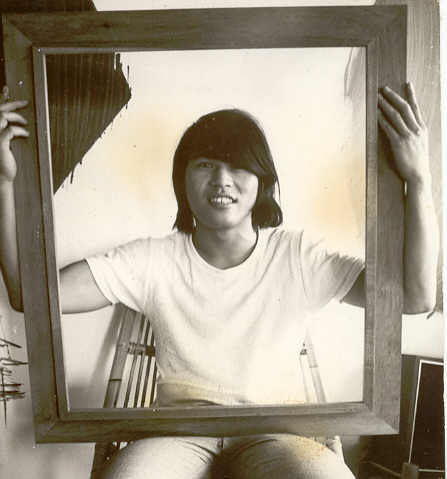 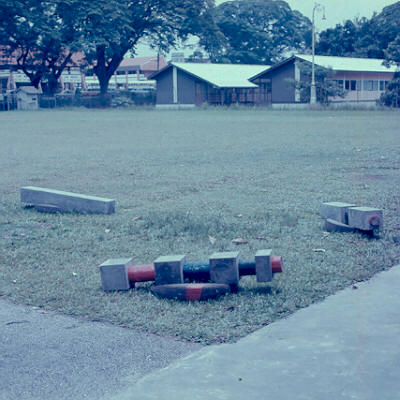 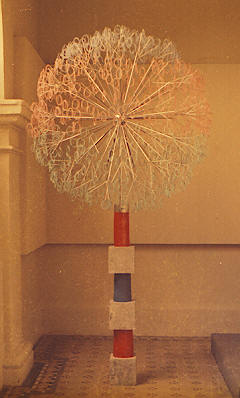 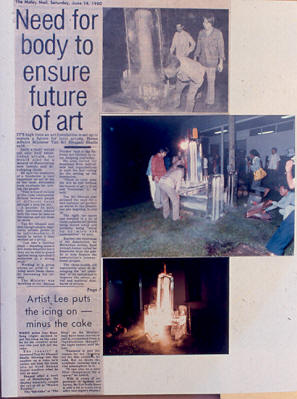 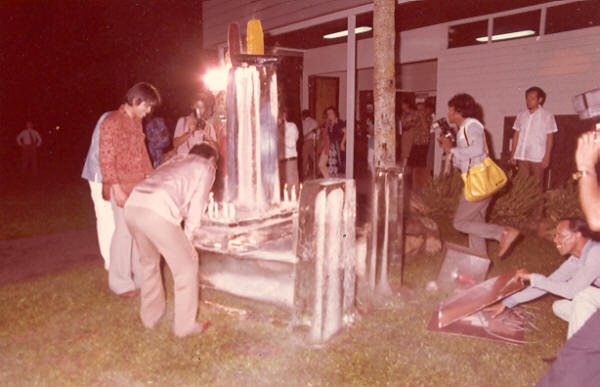 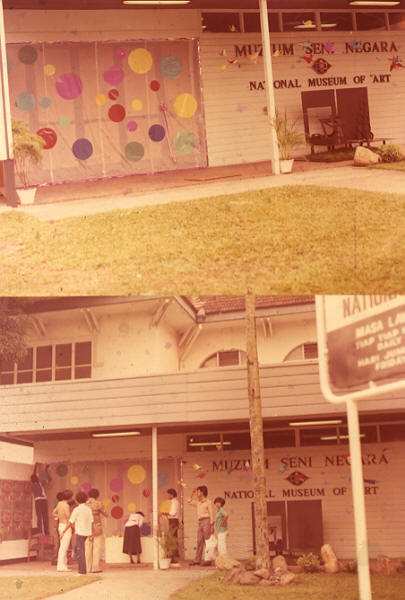 < 25 years  >An installation at the Opening of ‘Twenty-five years of Malaysian Art’ of the National Art Gallery at Jalan Ampang Malaysia on Oct  8 , 1982 .于马来西亚国家画廊 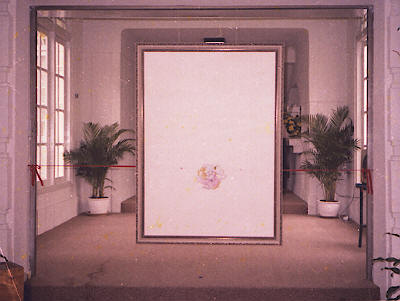 <Blossom1984> An installation at the Opening of the new premises of the National Art Gallery Malaysia on May 21, 1984  . 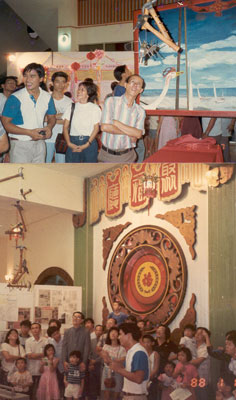 An Installation of 3 works on the ceiling at the Klang Hokkein Association Malaysia on August 17, 1988.

“……..In the 1971 National Cultural Congress (Malaysia) met to reconstruct the terms of a ‘national culture’ for our newly reconstituted nation. The Malays had asserted their hegemony and laid claim to the economic fruits of the nation, which the earlier liberal approach of the period immediately following independence had failed to deliver. The National Economic Policy (NEP) had been put in place with the aim of reconstructing wealth and opportunity for advancement in favour of the Malays. The National Congress asserted the necessity for Malay prominence in the realm of culture. The Dasar Kebudayaan or ‘Foundations of Culture’ were drawn up stating the necessity for the predominance of the indigenous cultures of the region, the possibility of incorporating other cultures where appropriate and the importance of Islam. Though this document never gained the force of law its tenets have permeated the official narrative of all Malaysian cultural production, including the visual arts. Today, the urgent assertion for Malay dominance of the 1970’s has given way to a more relaxed multiculturalism at home. However, the forces of globalization have usurped the role of national institutions in representing our cultural identity on the world stage.” Niranjan Rajah )

“In spite of best intentions and the participation of national curators, the narratives of major global art arenas……are underpinned by the preferences and prejudices of the host nations. At their worst these exhibitions have used their national co-curators as mediators in the extraction of information and resources in a colonial fashion. Indeed, the administration of these expansive and comprehensive exhibitions, curated on the basis of national sections has produced what can be described as neo-colonial curatorial hierarchies, with national curators feeding powerful central selection committees to whose unperatives regional ‘co-curators’ are obliged to comply.” by Niranjan Rajah ( Extracted from the "Regionalism in An Era of Global Art" from the Symposium “Constructing Cultural Identities in the Context of Globalisation” held in Malaysia in March 2000.)

" Overtly and covertly, events of May 13 ( 1969 Malaysia) and the Cultural Congress(1971 Malaysia ), and no doubt other related movements, began to shape thinking and practice among artists; they were far too shattering and fundamental to be ignored. Throughout the 1970's, artists began the difficult, painful process of rethinking their positions, and recasting their perceptions of culture, language, race, state/nation and identity. For some , the prospects loomed as intolerable and inhospitatable and they chose to migrate; some retreated into temporary or permanent silence; for everyone else, the stakes were too important and consequential not to be involved."
“ The passage from Merdeka ( Independent ) in 1957 through the cataclysmic events in May 1969 and to the end of 70’s is a movement from optimism and innocence to the realization that there are dark, violent, divisive and tragic profiles to mankind.”  (TK Sabapathy  "Vision and Idea Relooking Modern Malaysian Art", page71 & 74 -- Merdeka Makes Art, or Does it? published by the National Art Gallery Malaysia in 1994)