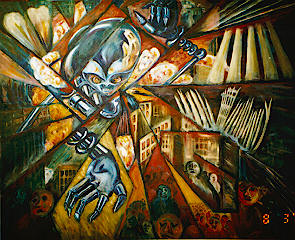 I use a robot as a symbol of terrorism. Robots, being mechanical and lifeless, are appropriate in representing senseless beings. A robot is incapable of feeling for others, and if misused, it would bring about massive destruction. Hence, the symbol of terrorism in the painting is a robot which is seen destroying buildings and killing people. With the attack on Sept 11, 2001, I feel that it has indeed changed people’s lives and psychologically brought about emotional sufferings.