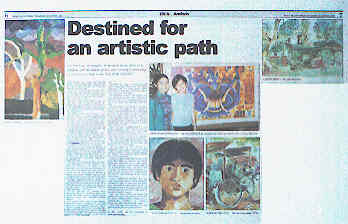 Lee Hui Ling, the daughter of top-notch artists, looks set to continue with her artistic pursuit after winning a scholarship to study in New York, writes Ooi Kok Chuen

At 19, Hui Ling looks set on a career path destined and nurtured by a creative environment. Next month, she will be off to New York to take up a liberal arts scholarship at Sarah Lawrence College.

Dad Kian Seng will be there to help her settle down and also feel for himself the artistic impulses and trends of an America bereft of its spiritual ancestors that spawned Action Painting and a succession of cutting edge movements.

Her pedigree, being the daughter of top-notched artists - sculptor-painter-printmaker Kian Seng and artist/children's art educator-cum-illustrator Shoko Lee - may be a cinch to her clinching the scholarship.

But Hui Ling's academic and extra-curricular credentials stand on their own and will be invaluable elements in achieving, and deciding, her potential and pursuit.

Whereas in most, having two giants for artist parents would have been a distinct disadvantage, but for Hui Ling, and her equally artistically-inclined younger sister by three years, Hui Lian, their exposure is one in spirit and essence rather than didactic and absolute.

The sisters grew up grounded in their open-view independence of their mother's then Malaysian Children's Art Centre in the 1980s, and the sensitivity and awareness of, and love for, the environment and animals.

Thus, in Hui Ling's art, this affinity of nature and culture is evident together with a compulsion to record and express the light and shapes of whatever she sees before her.

It is this unfiltered innocence that permeates her works, spanning from the age of 10 until the present, and which are shown in her first solo at the JW Marriott Hotel in Kuala Lumpur, on Aug 10-12.

The gamut of her subjects and compositions range from self-portraits to pets and landscapes and symbolic abstracts. At 13, she was already able to get a striking likeness of herself in a watercolour work, and such mirror images are repeated at various stages of her life - 15 (oil), 16 (oil) and 19 (oil).

Typically, Hui Ling is enamored with outdoor sketching, like in her Port Klang drawings in ink and watercolours. This is somewhat reminiscent of her father's early career, even as a schoolboy.

Her depiction of Jenny, the family's pet mongrel, digging her ear, using a panoply of patterned colours, in both watercolour and oil, is an interesting study of media and style.

That her parents were prudent in guiding her only on the technical and formalistic aspects can be gleaned from the rough edges in some of her works on show, without direct intervention from the two "masters".

This approach allows her ideas, imagination and creativity to take rein, and her own individuality to blossom, though it is still a little too early to tell.

Some may point, unquestionably, to the fleeting glimpses of the carefree nature of Shoko's celebrated Sunny Boy and her My Diary oeuvres, and in the Mask pictures, to Kian Seng's iconic elements of fire and destiny (as depicted by playing card symbols).

They are general kind of statements, and do not detract from the expressiveness and boldness of Hui Ling's works.

This is especially true of her two "Harlequin" oil-on-canvas works of textural sunflowers and garish tree silhouettes, and of the Masks metamorphosis. Both abound with exciting potential.

With self-deprecating humour, she wrote of her fascination for "painting surrealistic Indonesian gargoyles, and writing obnoxious poetry bursting with teenage angst in the middle of the night" and how when scurrying for shelter while painting on a boat when the rain came, she calmly accepted Nature's collaboration on her newly dried work.

Shoko commented wistfully how Hui Ling's involvement in the tough and lonely competitive sport of swimming had somewhat dissipated her involvement in art. On hindsight, it is this discipline, perhaps, and independence of spirit, that could work for her when it matters most.

The New York break is fortuitous and deserving for Hui Ling, who has to cut short her mass-communications studies at the Limkokwing Institute of Creative Technology after one-and-half years.

New York should be the start of a new palette in her life and artistic pursuit. 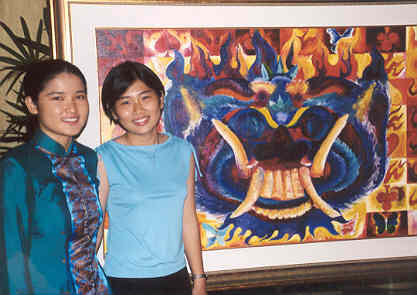