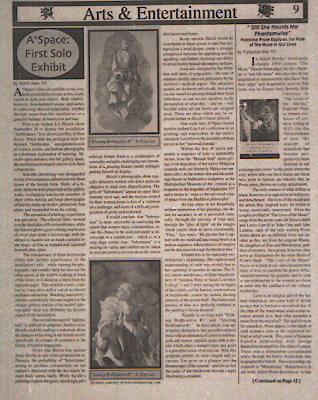 A*Space hosted international student Ling Lee’s collection of oil paintings and watercolors. In her artist’s statement, Lee refers to the assembly of these pieces as her “pictorial journal”.

Within the trio of series presented, a sequence of time is undeniably shown, from the “Mamak Stall” series giving vivid depictions of her native Malaysia (mamak stalls are distinctly Malaysian outdoor cafes), to the watercolor and ink paintings based on bodhisattva sculptures at the Metropolitan Museum of Art, created as a response to the tragedies of September 11th and a means to “express the universal values of peace from the Buddhist philosophy”.

As Lee states in her beautifully written summation of her paintings, her desire for accuracy in art is prevented, naturally, through the passing of time and, through the “play of light” on the images, which causes them to move consistently. Thus, Lee states, “the pictures that I capture with my mind and quavering brush is a motion sequence, whose process of creation can be discerned through the brushstrokes.”

I found this to be especially evident in Lee’s oil paintings. Her sophisticated understanding of color was crystal clear in her capturing of autumn on canvas. The fiery centers and dreamy, twilight-tinged corners of “Autumn Trees at Sarah Lawrence College” I and 2 were among the strongest of the exhibit, and the harried, emotional use of brushstroke created the rushed, fleeting intensity of the season itself. The bittersweet passing of time was perfectly rendered in the painting’s frozen moment.

Equally as exciting were “Floating Bodhisattva #3” and “Smiling Bodhisattva #1”. In these pieces, Lee approaches abstraction, her peaceful subjects pulse with animation of crimson and blue, gold and mauve, applied again with a texture which takes a tranquil topic and gives it a powerful sense of mysticism. With this gorgeous exhibit, by turns elegant and vivacious, Lee gives us a glimpse into the dreamscapes of her journal – and lets us feel the pulse of her brushwork beyond simply illustrating a moment.