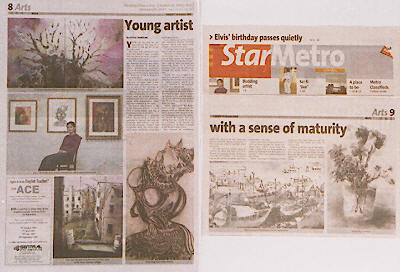 Young as she may be, 20-year-old Lee Hui Ling is a name to look out for on the local art scene.

Her third solo exhibition entitled “Little Book of Days” revealed volumes about the artist’s progression in the world of arts.

Her first exhibition two years ago featured drawings and paintings on lifestyles of people in Klang, architectural structures such as the Convent High School in Klang and of the family, expressing the simplicity of life as seen in a passing memory.

But it is evident that the artist’s style and technique have a subdued strength and a sense of maturity as seen in the paintings at “Little Book of Days” exhibition.

Gone are the innocent lines and strokes. Instead the 24 art works, which were on exhibit over the weekend (Jan 10 to 12), show Lee’s talent, deep commitment, effort and expressiveness in her work.

The Liberal Arts student at the Sarah Lawrence College in New York is going places and has a promising future as an artist.

The exhibition is a pictorial effort, documenting a series of paintings in charcoal, pen-and-ink drawings, watercolours and oils featuring sceneries, flowers and sculptures with the Sarah Lawrence series, Sunflower series and Bodhisattva series.

It is a follow-up to her second solo exhibition entitled “Pictorial Journey “ which took place at her college in October last year.

“Paintings have a way of explaining things that photographs don’t.”

“As much as I wish accurately record what I see, in my eyes the play of light causes the images to be constantly moving, thus the picture I capture with my mind and quavering brush is motion sequence that can be discerned through the brush strokes,” Lee said.

Clearly, the play of light is an important element in her painting, showing the intensity of her choice in subject matter, which is no longer confined to self-portraits, animals and abstract art.

The Bodhisattva sculptures at the Metropolitan Museum of Art in New York brought about a certain fascination to Lee and she spent a lot of time sketching and painting the lovely treasures of ancient Asian heritage.

“While working on the Bodhisattva series, I approached this subject from an artistic and aesthetic point of view because to me, the Bodhisattvas echo the universal theme for peace” Lee said, adding that she created the series as a response to the turmoil and devastation of the Sept 11 attacks at the World Trade Centre.

Her interest in sunflowers, which she refers to as the “most distinctive and bold species of flowers” is the reason she chose to highlight them on canvas.

“Through my brush strokes, I hope to capture the heart and soul of the sunflowers, its passing moods, deliberate moments of brilliance, the sturdiness and secrets within its petals and luxuriant leaves,” she said.

Some paintings on display are not for sale and these include the Sarah Lawrence series, where scenes from her room in New York are documented as personal keepsakes, and will serve as a reminder of her undergraduate years at the college.

Present at the first day of the exhibition were the artist’s mentors, her parents Lee Kian Seng and Shoko Lee and National Art Gallery  board of trustees chairman Tan Sri Kamarul Ariffin Yassin.