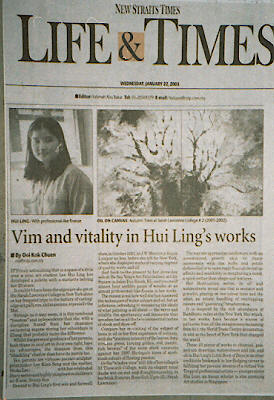 It’s truly astonishing that in a space of a little over a year,  (Liberal Arts) art student Lee Hui Ling has developed a palette with a maturity belying her 20 years.

It couldn’t have been the exposure she got at the Sarah Lawrence College in New York alone or her frequent trips to the battery of cutting-edge art galleries and museums, especially the Met.

Strange as it may seem, it is this newfound “freedom” and independence that she, with a discipline honed from her champion swimming regime during her schooldays in Klang, that probably make the difference.

Whilst the personal guidance of her parents, both titans in local art in their own right, have its advantages, the distance from this “shacking” shadow does have its merits too.

Rewind to Hui Ling’s first Solo and farewell show, in August 2001, at J.W. Marriott in Kuala Lumpur (Malaysia) no less, before she left for New York, where she displayed works of varying degrees of quality, warts and all.

And back- to- the- present to her three-day solo at Art Folio Gallery at City Square I Jalan Tun Razak,KL(Malaysia), and you could almost hear audible gasps of wonder at an almost professional-like finesse in her works.

The reason is not how well she has mastered the techniques of water-colours and oil, but an infectious, refreshing re-romancing the ideals of what painting is all about—the verve and vitality, the spontaneity and innocence that are often lost in all the twin commercial tactics of shock and show-off.

Compare her re-visiting of the subject of trees in oil in her first experience of autumn, with the” insistent intensity of the leaves, deep viridan green, turning golden, red, purple, rich browns” of the same stark contrasts against her 1997 Harlequin trees of mish-mash colours of flaming passion.

Or the “window view” still life of her college’s 33 Titsworth, with its elegant tonal daubs wet-on-wet and draftmanship, to her brisk Restoran Bismillah II pre-SL (Sarah Lawrence)

The way she approaches sunflowers, with an unrestrained growth akin to dance movements with the bulbs and petals dishevelled or in more regal flourish reveal an affinity and sensitivity in recapturing a mood, a spirit rather than shape and textures.

Her Bodhisattva series, in oil and watercolours, reveal one that is sentient and graceful, playing on one colour tone and the other, an astute handling of overlapping colours and “quavering” brushstrokes.

It is inspired by the rich abundance of Buddhistic relics at the New York Met, which, in her works, have become a source of palliation from all the antagonisms stemming from 911, the World Trade Centre devastation in and at the heart of New York that changed the world.

These 23 pieces of works in charcoal, pen-and-ink drawing, watercolours and ink, and oil in Hui Ling’s Little Book of Days is another creditable bookmark in her fledging career to fulfilling her parents’ dreams of a virtual Von Trapp of professional artists--younger sister Hui Lian, an ASEAN scholar, is also pursuing Art studies (Art Elective Programme) in Singapore. 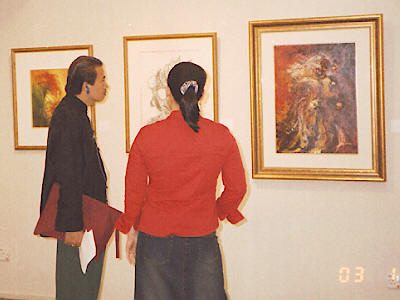