Artist gives US varsity a sculpture as thanks

NEW YORK: To mark his daughter’s graduation at the Sarah Lawrence College in New York, Malaysian artist Lee Kian Seng presented a sculpture entitled Blowin’ in the Wind to the college.

His daughter Hui Ling, 23, an artist in her own right, completed her four-year Bachelor of Arts course at the Bronxville liberal arts college known for its rigorous academic standards.

Lee, who was in New York with his artist wife Shoko and younger daughter Hui Lian for the graduation, presented the sculpture to college president Michele Tolela Myers before the graduation ceremony.

He said his sculpture of bronze, copper, stainless steel, aluminium and other metals was titled after the 1963 Bob Dylan hit song.

“It is just a small gesture to thank the college,” said Lee.

Located some 25km north of New York City, the Sarah Lawrence College is a co-educational liberal arts college that offers undergraduate as well as graduate degrees.

Hui Ling studied at the college under the Gaylord Donnelley Family Scholarship and the Sarah Lawrence Board of Trustees Scholarship which were worth a total of US$160, 000.

The awards were for her excellent academic record and outstanding contributions to the college community.

Hui Ling had made an impact at the college and one of her pieces in watercolour, pen and ink entitled The Teahouse at Sarah Lawrence College was selected for the front cover of the Spring Commencement 2005 souvenir programme.

Hui Ling said she would be returning to Malaysia for a short break before deciding on her next move.

“I certainly hope to come back to do my graduate studies, but right now I think a need a break,” she said.

Hui Ling, who described her years at the college as very intense and satisfying despite the long hours of studying, “still managed to do a lot of paintings, mostly in oils, water colour, and ink.”

In 2002, she held a solo exhibition entitled Pictorial Journey at the college.

She said she liked abstract art and studied Indian, Chinese, Japanese, Arab, Persian and Egyptian art forms to develop her own form of genre that moved away from Western concepts. 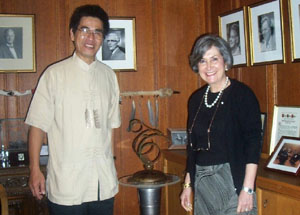 ART CONTRIBUTION: Lee and Myers posing with Lee's sculpture (“Blow in the Wind”1992)  during his recent visit to the college in Bronxville,New York, to attend his daughter's graduation. 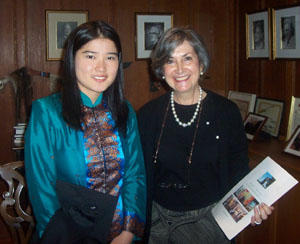 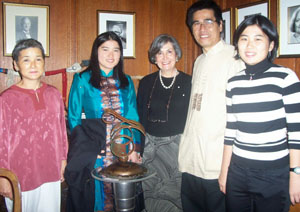