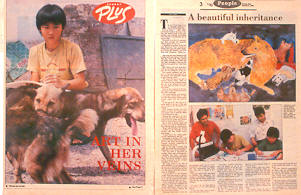 The year of the Dog or Gou is especially relevant to the art of Lee Hui Ling. Born on March 30, 1982, which was the last cycle of the Year of the Dog, she spends much of her time painting and drawing everything from portraits to landscapes and of course, dogs.

"Because of my love for animals, they have become my favourite subject-matter for my art."

"Hui Ling has been dabbling with brushes and watercolours from the time she could walk. She started out simply by playing with colour and with time developed a fine eye for detail and perspectives," said Kian Seng.

Both Shoko and Kian Seng have tried to encourage Hui Ling to explore all the boundaries of her art.

This careful guidance and freedom of expression provided for by her parents have definitely helped in nurturing her talent.

"We want Hui Ling to be able to express herself freely. While we try to give her the technical know-how, we do not influence her with our own ideas or styles of work," said Shoko.

Even so, the creations of her parents seem to have inspired much of Hui Ling's paintings.

Her preoccupation with animals is especially reminiscent of Shoko's own illustrations which centre around nature and the environment.

At the age of 11, Hui Ling is already adept at the use of line and hue to express her fascination for animals.

With minimal strokes and bold dashes of colour she renders sensitive images with a maturity which is way beyond her age.

Having been exposed to the Fine Arts from the start, Hui Ling has a natural feel for shape and posture which is interesting to witness.

She is able to handle shape and posture, so crucial to wildlife drawing, with the ease of a professional.

When asked whether she intends to follow in the footsteps of her parents, Hui Ling simply frowns and shrugs.

"I don't know yet. I enjoy painting but swimming is fun too."

Swimming is another one of Hui Ling's favourite pastimes. As with her art, she takes the activity extremely seriously competing at school and club levels.

But is Hui Ling a typical Dog child? Are creativity and aesthetics hallmarks of the Dog personality?

The Dog child is described as friendly, happy and well-balanced.

Sensible and fairly consistent, the Dog is hardworking and industrious. He will be helpful to others and be protective to the younger members of the family.

Hui Ling seems to be true to these qualities. In her approach to her art, she is serious and diligent. She interacts well with her parents and the rapport with her younger sister is delightful.

Independence is yet another quality Hui Ling seems to possess. In her search for interesting subjects, she has explored her neighbourhood with her sister in tow.

When offended, the Dog child's anger may flare but it subsides relatively quickly, returning to its normal equilibrium. When he feels he has been unfairly treated, the Dog child will retaliate.

Although these anger flares did not manifest itself, the set of this young lady's jaw seems to suggest that this unassuming Dog child may erupt like a volcano if provoked.

The Dog child is also described as efficient and diplomatic and lacking in prejudice. Through the meeting and the photo session that followed she was cooperative and obliging.

To sum it up, the Dog child is said to have a warm and enduring beauty..

In all, Hui Ling seems to epitomise the typical Dog child.

Ironically, artistic creativity does not feature as one of the prominent facets of the Dog personality. Hui Ling, on the other hand, seems to thrive on it.

Perhaps one should consider the authentic formula of the Chinese horoscope with a pinch of salt.

Feb 10, 1994 brings in the year of the faithful and anxious Dog in the Chinese lunar calendar.

Supposedly introduced by Huang Ti, the Yellow Emperor, the calendar has been in existence since 2637 B.C. A complete cycle of the calendar takes 60 years and is made up of five separate stages of 12 years each.

These twelve years are represented by 12 animals which, according to legend, were the only animals that came to bid the Lord Buddha farewell when he departed the Earth.

As a reward he named a year after each animal in the order that they arrived. Thus, the Rat, Ox, Tiger, Rabbits, Dragon, Snake, Monkey, Rooster, Dog and finally the Boar.

The animal ruling the year in which you were born exercises a profound influence in your life as it is the animal that hides in your heart.

This sign is said to serve humanity, promote universal understanding and heighten communications. It is a time for personal contact and the establishing of strong bonds with your fellow man motivated by idealism.