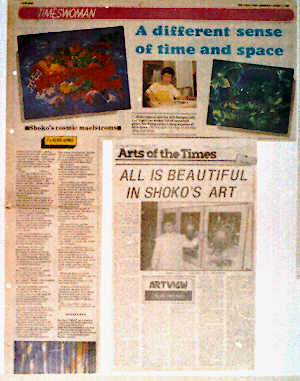 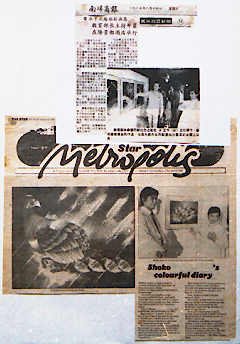 A toy car rests at the end of a rainbow. Baskets full of household provisions fly across a deep expanse of blue space. Flying fish and dragonflies – coming from some mysterious point source – flit across the canvas towards light.

Shoko Lee, (38 next year), wife of Malaysian artist LEE Kian Seng, poses many questions through her art. In her forthcoming exhibition – My Diary 1983-1985 – Shoko makes us question the limits of artistic creativity and vision.

Her works make us ponder. Are we frightened by the unknown?

Do we dislike what we do not understand, or like a child, do we believe there are worlds beyond what the physical eye can see?

Through her water-colours, Shoko revives the images and ideas born of her child-like curiosity. We are also goaded into seeing anew the common objects around us.

On canvas, Shoko captures the quiet yet wondrous atmosphere of a Malaysian rubber estate. Seen through the artist’s eyes, rubber trees sprout out of mellow ground, warmed by multi-coloured diagonal shafts of light.

Shoko draws inspiration from motherhood. She has a “three and half year old child, Hui Ling” and another one is expected “some time in October.”

During her last pregnancy, Shoko had a craving for “red-hot and green-hot chillies”. Her fantasia Chilli Series – one which hangs in the Balai Seni Lukis Negara (National Art Gallery Malaysia).

Her watercolour chillies – moving around in whirlpools – conjure visions of cosmic maelstroms. The chillies appear to vibrate in an explosive vortex.

Shoko admits her chilli series reflect her “search for the answers to the mysteries of life and the universe.” As the chillies emerge from a source of light, Shoko has given artistic expression to a puzzle of science – if we get energy from mass through fission, was mass – in the beginning – created from pure energy?

Following from the law of action and reaction, life, then, is flux and change, and seemingly contradictory – perpetually going round in circles.

Through her art, and her children’s books, Shoko seeks to explain science in terms the non-scientist can understand. From her early childhood experiences, and by listening to the questions her daughter asks, Shoko re-creates the child’s sense of wonder.

“I found out children have a different sense of time and space. And some adults have rediscovered this space-time concept too. We make artificial barriers between time and space. Or we separate space into earth, water and sky. Do these barriers really exist? I think not.”

Before picking up a set of values, the child’s mind is open to a sense of wonder, an awareness of timelessness and continuity in life.

In Shoko’s world of creative expression she goes back to childhood, to a time when things are not fixed by space or time. And what an object can do is not limited by what we think it does.

After all, a child is right. In zero gravity, even vegetables can fly.

“ I must congratulate you, Shoko, for you are a brave woman, brave because you dare to show us your diary,” said Datuk Abdullah Ahmad Badawi, the Minister of Education (now Prime Minister of Malaysia), while opening Shoko Lee’s exhibition entitled My Dairy 1983-1985 at the Hotel Equatorial in Kuala Lumpur (Malaysia) recently.

The guests who were present at the opening were more than close friends; they were people who knew Shoko’s work, and they had come back, many of them, to be refreshed, to share the joy and mystery of living. They came to feel young again.

Two years ago, Shoko had held an exhibition. Her work then reflected her anticipation and marvel at the creation of life, of pregnancy and the beginning of motherhood.

My Diary 1983-1985, an exhibition of 45 pieces of Shoko’s work, is only an extension of her earlier preoccupation. Her concept of and outlook   on life   remain unchanged. She displays the same exuberance and has preserved th childlike fascination with life which was the essence of her first exhibition.

Emotions speak for themselves through objects and colours executed be her superior watercolour techniques.

Fields of dragonflies travel in unison through a vast expanse with a prominent rainbow painted into the skyline. Crabs and fishes pouring into space, baskets full of bright red chillies, trees, toys and animals; these all make up Shoko’s world.

“ I like beautiful things, happy things, especially the rainbow. After the rain, you may sometimes find a clear bright sky, and from nowhere comes the rainbow The rainbow is a mystery if you do not know the scientific explanation for it. But it is beautiful and seeing it makes you happy”.

“ My daughter’s fascination at making new discoveries becomes mine at this stage. Our world is new to her and she is curious about everything”.

“She talks to the cat innocently, it is a joy to watch her. She identifies colours with objects she knows. When I tried to get her to name red, she said ‘chilli colour”-that is logical for her”.

The pictures Shoko paints know no limitations; all things are possible in her land of fantasy, her objects conquer all barriers…Reality becomes momentarily amputated.

Shoko is 37 years old and is married to Lee Kian Seng, a well-know Malaysian artist .

Shoko’s world is a world of innocence. She believes in life. For her, there is a fine balance in everything.

“If there is a Black hole in space, is it not also possible that there is a white hole? If the black hole is equivalent to hell, then the white hole will be paradise.”

Shoko is looking for an appropriate motif for the white whole-paradise. She hopes to put her thoughts into future books. Her first book, Sunny Boy, was well received, and she is thinking of producing more children’s literature.

What do the people think of her work?

“Her work is fresh, it’s innocent and invigorating. I like it,” said Syed Rashid Putra, who was at the opening.

“I like the way she presents everything with total abandonment. Her work is vibrant and alive. Shoko’s world is a happy world that is a fascination in itself. I am impressed,” Puan Margaret Ariffin said.

Vernon Emaung and William Wong both said Shoko’s work could be read at two levels.

“ On one level, her images are of happy things. But some of her works can be read differently. When she uses harsh colours, there is a hint of something frightening. Shoko is great, she is above ordinary!”

Said Kamal Badawi, who is back from England for a holiday, “Her colours are bright and cheerful, happy. paintings are usually drab but Shoko’s pictures display a beautiful harmony of colours.”

“Fabulous; her message is clear, her subject is refreshing, she makes you come alive”, Mrs Oriinthia Coquillat said.

Good artworks have a heart, it makes one happy, it moves and touches people, Shoko say. Those who have seen Shoko’s diary can bear testimony to that statement. 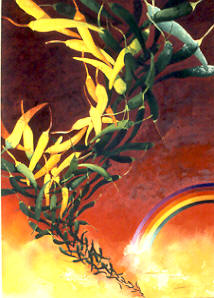 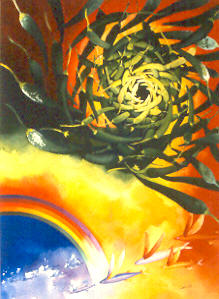 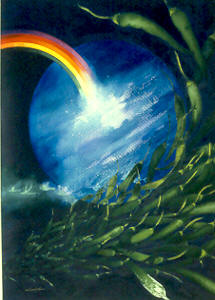 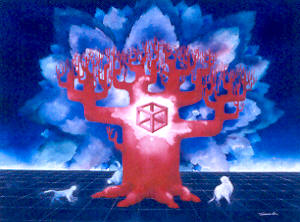 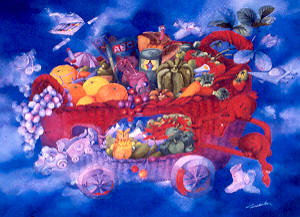