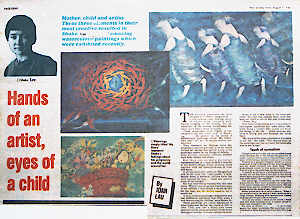 Mother, child and artist: These three elements in their most creative resulted in Shoko LEE’ amazing watercolour paintings which were exhibited recently.

The painting possesses the wild abandon of a child’s imagination-a red rocking chair floating above an Arctic scene complete with walrus lounging on the iceberg. Yet the assurance of the strokes embellished the whole work with a sense of reality.

These seemingly wild flights of the imagination are very real to Shoko LEE, the painter. In her series of watercolour paintings titled “My Diary 1981-1983” we see 39 works, which are interiors.

They represent her feelings about her pregnancy and her perception of the world around her during that period. A few of the paintings centre on the things of infants-baby stroller, colourful rattlers, stuffed toys, baby basket and shoes.

But they are no more mere pictorial representations of a fond mother’s interest n her baby’s things. These pictures blend together with her interpretations of time and space.

It all becomes very abstract. Things float and hover the countryside, a fork spears down a rainbow, chillies from the aura around the sun-these are merely some of the images.

She has interesting reasons why she uses them.” While I was pregnant, I had this urge to eat chillies. I was afraid it would be bad for the baby but the doctor assured me it would not”.

“ I have several paintings using green and red chillies to represent that time when I had this craving for chillies,” says Shoko, 35.

These paintings are visual depictions of what happened during the years of 1981 to 1983. They are like a dairy and these abstract works allow us to share in the same feelings of wonder, humour and puzzlement.

Shoko is not a new force in the local art scene. She has had certain fame with her book for children which she also illustrated-“Sunny Boy”.

Now those illustrations have expanded to encompass questions she asks about life, birth, being a mother. Her motifs are from the things of her life-crabs because she lives in Klang (Malaysia)and cats because she loves them.

“My work is the inner expression of events in my life,” she adds. “The objects float in the paintings just like my baby did when she was in my womb.”

Things hover in the sky and are manifestations of the freedom felt by the artist’s imagination. It adds a touch of surrealism to the paintings and a sense of the fantasy usually found only in movies.

Shoko is now a housewife living in Klang with her baby daughter and her artist husband, LEE Kian Seng. “the predominant colour  in this series is dark blue. This is to give the paintings the feel of space”

“I usually do not have a preference for colours as they are all beautiful to me. But in this series where space plays such a big part I am using dark blue more often,” she explains.

The paintings themselves do not look like watercolours. They have solidity as compared to the usual translucence of watercolours. But the pastel hues and the wonderful attention to detail would exile the mind of any child.

Shoko stars each work with a sketch. “When I am satisfied with the sketch. I start working on a large format. Working with watercolour means making sure of one’s use of colours.

“It is in my mind. I think of the colour I want and then start working on it. I cannot afford to make any mistakes,” she adds.

So this is Shoko LEE’s pictorial space…her inner landscapes. Her paintings were exhibited at Hotel Equatorial (Malaysia) from July 28 to Aug.1 (1983) 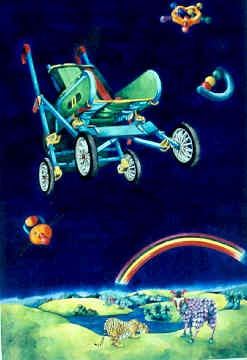 Shoko LEE first made an indelible impression of the Malaysian Art scene through her illustrations of ‘Sunny Boy’. These were wondrous ventures into the realm of phantasy, of personal legend, reminding one of ‘The Little Princes’.

With the present series of watercolour paintings, the artist of Sunny Boy has come of age, entering the ‘legitimate art’ circle. Art makes it possible to realise the dreams of our will. The age of rational has produced parallels in irrationality, creating the balance, lest we become too intense with seriousness. In the spirit of ‘Sunny Boy’ it is important that we retain the child’s sense of wonder of the ‘simple’ world – such as the sky, where one’s imagination is free to wonder from the everyday demands and chores to the limitless bounds of the thinkable space. Shoko let her mind wonder and her imagination wander among the boundless universal space. Being an artist she is able to translate her responses into visual forms, which are then transmitted to us in a new differentiated reality. We, as observers, are on turn enriched by the dimension of her experience… In her present collection of works aptly titled ‘My Diary’ stretching from 1981 to 1983, all those wondrous ecstatic moments of sheer serendipity, of the playful joy, are set in pictorial space – form and space being the main elements in visual/pictorial art.

The artist is inspired by space, rearranging objects in an irrational configuration in space. The elements of ‘irrationality’ are essential in a highly rationalised order of the condition of society.

In these works, the artist relates the ordinary everyday objects with which she is so familiar, especially during serving and washing up, cups and saucers, to objects in the outer space where there is no gravity. Where rockets, space ships, and space shuttles, hurtle in the ‘scientific space’ these common objects float freely in the space of the imagination. Like a good-humored poltergeist, the artist tosses the objects in a surrealistic space.

Before the birth of her first child, the artist was closely attached to her cats, which were regarded as members of the family. These are portrayed in human guises.

During a certain stage of expecting her first child, Shoko was symbolically interested in round objects, the sense of completeness of terrestrial objects, symbol of the self, totality of the psyche.

As pregnancy progressed, the craving for chili is expressed in glowing reds as if lit from within. The biomorphic form that represents embryonic stage later developed towards the birth of the first baby. The artist conjures a new phantasy as toys float weightlessly in space.

Using mainly watercolour on thick cartridge paper the paintings glow in layers of brilliant colours as Shoko skillfully wields her brush, turning out the real magic of the imagination, bridging the naïve world of the universal child and the sophisticated world of the contemporary adult. We are fortunate to feast on this creative offering, reminding ourselves of personal values, which are dearest to us – which can be shared but never taken away. The essential qualities in art are emotive and contemplative. Let us wonder passionately and ponder religiously at these serious exteriorizations of the spirit of the eternal child, to grasp its message, for the best of art stems from a moral act. 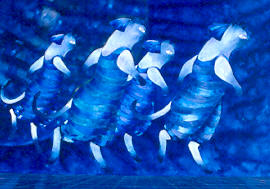