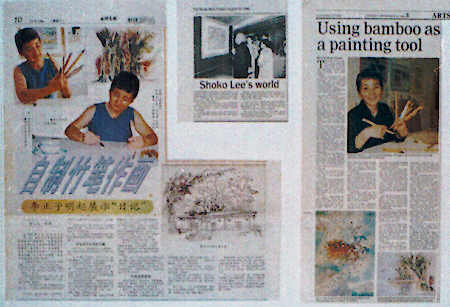 Using bamboo as a painting tool        by Ooi Kok Chuen

The spirit of bamboo comes off in the new works of Shoko Lee in the fourth of her “My Diary “ series, this time covering the year 1989-93.

Bamboo is popularly depicted in Chinese brush paintings for its tenacity and strength and also figures prominently in Malay culture for its beauty.

These same qualities are harnessed by Shoko Lee for use as drawing pens of “brushes”.

They may not be the most compliant or versatile of medium, but as can be seen from the 38 pieces of bamboo/ink and watercolour paintings on watercolour paper now on show at the Sepang Institute of Technology (SIT) in Klang (Malaysia), they can work wonders if skillfully coaxed with line, rhythm and space.

Lee improvises with these bamboo “brushes” with nibs cut to varying degrees of sharpness at one end, to produce lines ranging from the sparse and straggly to the bold and blotty.

It’s intriguing the way these bamboo brushes could reproduce the textures and stark quality of charcoal or pens, and with such a raw finish too!

Lee sources the bamboo from some of the groves growing around her Klang home area, carefully select ting only matured yellow ones as the young shoots are too soft and get frayed easily at the nip.

Then they are left to dry for a few months to further allow their “ temperament” to harden.

Lee started using bamboo as painting materials about 20 years ago when she was then giving children’s art classes, but they came into serious play in her painting only in the last five or six years.

“ I enjoy experimenting with bamboo. They are so much fun. Sketching with pencils don’t give off a strong impression the way bamboo does,” said Lee, who said that most of her bamboo drawings were done in alfresco sketching with her daughters Hui Ling and Hui Lian.

Her subjects include sceneries, portraits and mechanical contraptions like an Indian temple, the old Klang General Hospital, bridge re-construction over the Sungai Klang, a bodhi tree, and figures of the boat people in Port Klang.

Sometimes back in her studio or there and then on the spot, she would dash a little colour of washes over them with the brush.

The 38 works represent the preliminary experimentations with the medium, and she is working towards getting a bricklike quality from these stumps.

Bamboos have their limitations. They are more elusive and lee predictable as they cannot retain or render colours the way brushes do.

The relative hardness and less absorbent nature are more suited for staccato strokes and present problems when it comes to more architectonic draughtsmanship.

But like in Chinese calligraphy where pressure is the key to variety, contrast and qi(energy), the thrust and pull between the gentle and the gestural can make a lot of difference.

In a way, by using bamboo as the artistic medium of expression rather than as the expression itself, Lee is going back to the Asian roots, and to nature.

As curator Lee Kian Seng, her husband of 24 years and also an artist, put it: “ the use of bamboo as painting material instead of just as a brush holder in her art is meaningful. It is a biological thing, for artists are part of nature too.”

“ Bamboo are very important in Asian culture-physically for their springy nature and incredible strength; spiritually the joints make them different from wood; and morally for the empty ‘heart’ (hollow) which teaches people to be humble.

“They are also part of living as they are used in items like chairs and baskets.”

The exhibition also continues Shoko Lee’s celebration of her love for life and living things- a central theme since her self-illustrated storybook, Sunny Boy (Berita Publications 1980) which show s how precious the environment and avi-aqua-fauna are an dhow we often take them for granted until one day when they suddenly disappear.

These are shown in 12 pieces of water colour paintings compared to the 40 watercolours unveiled in her “My Diary” (1985-88) solo exhibition at the same venue last June-July.

The works are mostly of the computer game Pai-Man-type fishes going after a “shoa!” of chillies. 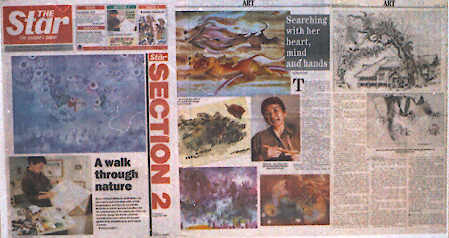 A walk through nature - searching with her heart, mind and hands

Since coming to Malaysia (in 1972), artist Shoko LEE has experience a paradigm shift: in both her perception and attitude towards life. Motherhood and her growing love affair with the natural beauty of the country are at the centre of this change. Her fourth exhibition in the My Diary series charts the dynamic growth of her strengths as an artist and as a woman.

The year 1972 was eventful and unforgettable for Shoko Lee. It was the year she fell in love with Malaysia and simultaneously began her artistic career.

According to hubby Lee Kian Seng, a renowned artist in his own right as well as curator for her exhibitions, it was the "wonders of the natural surroundings in Malaysia which inspired her love for art."

Shoko's latest exhibition features works which are thoroughly Malaysian in essence. In her fourth and latest My Diary art exhibition, a collection of 12 watercolour works and 38 bamboo/ink paintings produced between 1989-93 is presented. Shoko's love for nature's rich fecundity is still strongly conveyed in her many paintings of nature.

Shoko's creative powers and remarkable talents are practically stamped on every canvas. These drawings are testaments to her growing aesthetic consciousness and vision. Shoko has come a long way since her fist exhibition, the Sunny Boy series in 1981 which depicted her fascination with the Malaysian "simple lifestyle and undisturbed natural surroundings" as well as the "mystical Universe".

But 1981 was fruitful for Shoko in another sense: she conceived her first child, daughter Hui ling. And things were never quite the same for Shoko after that.

"I had a very different outlook towards life after the children came. In fact, I felt differently towards life," says Shoko.

Shoko's altered perception has coloured her world in a big way. Inspired by motherhood, she started the My Diary series and since then, the succession of each aesthetic landmark (in the form of her My Diary series) has charted the dynamic growth of her strengths as an artist and as a woman.

In her latest exhibition, numerous watercolour paintings depict domestic joy and contentment throught the facial expressions of "humanised" animals. A family of lions flying in the open is particularly arresting as it expresses freedom and joy.

Lee believes that Shoko had experienced "a paradigm shift" whereby both perception and attitude towards life have undergone a transformation due to external influences and the surrounding environment. In fact, some of her new paintings are influenced by her daughter's "Pac Man" computer games!

The chilli is another heavily-drawn motif. Having developed a fondness for it during her pregnancy, Shoko has, until today, included this image in many of her paintings.

In some ways, My Diary (IV) is an artistic turning point for Shoko. For the first time, she is exhibiting paintings made with a bamboo pen. Shaped just like a pen, this innovative new "family invention" merely emphasises Shoko's latent creative prowess. Artistic expression is taken literally to new heights through the use of this little "breakthrough".

Although she has been experimenting with it for the past 20 years, Shoko's personal breakthrough with the pen only came about between 1989-1993.

Again, nature's bountiful beauty finds its way into many of her bamboo ink paintings.

The bamboo is especially meaningful for both Shoko and Lee as "it is part of our Asian culture. It is an important image that is seen through art, dance, music and literature. For the Chinese, the bamboo is symbolic of the enlightenment and purification of the human mind and soul."

The bamboo is however invested with a far more spiritual significance than it normally has for Shoko and Lee.

Shoko's belief in Man's harmonious existence with the cosmos surrounding him is reflected in most of her works; kampung houses nestled amid ancient and gigantic rainforest trees is one of them.

But paradoxically, her works also show that man does not comprehend this ideal, and seeks to rule nature all the time.

One particularly stark black and white piece documents the lamentable state of current affairs. The desired development of the nation is represented by the ultra-modern highway crashing its way through the rural landscape where an old house is located.

Juxtaposed side by side, the picture is a powerful testimony of the price we have to pay for modernisation; this house is no longer in existence now that the highway has been completed.

While Shoko is interested in recording the natural sights observed during her morning walks, "man-made nature" in the form of the concrete construction of buildings and industry are also not excluded.

In this latest exhibition, Shoko has wielded the bamboo pen to project her feelings and visions. And through it, Shoko has been redefining black and white drawings with her powerful strokes and controlled lines.

Clear, clean lines juxtaposed with shades and the careful manipulation of space and dimension; these are the hallmarks that have been achieved through mental, emotional and spiritual maturity over the last few years.

Lee observes: "She has matured a lot as an artist as her heart, mind and hand are united in the search for meaning in life." 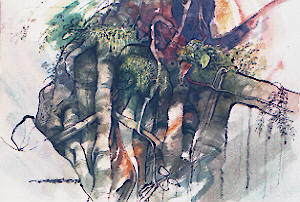