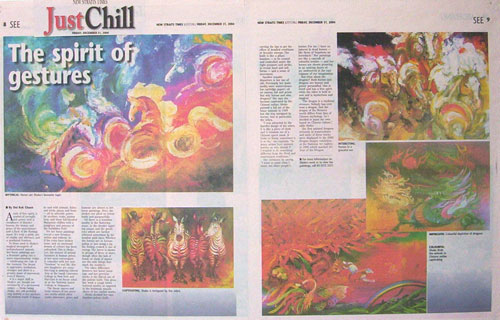 A rush of free spirit, a symbol of strength and power with a cloudburst of thunder hooves, the beauty and grace of the musculature and the flash of the flaming mane. It’s truly a giddy mix of vitality and vibrance, and a new-found freedom.

To those used to Shoko’s magical menagerie of technicoloured animals, her horse paintings are a dramatic gallop into more expressionistic realm, celebrating the Cult of the Gestural. The thrust is aggressive, symbolism stronger, and there is a greater sense of movement, even if illusory.

It is a major shift in Shoko’s art, though not necessarily of a permanent nature -- Shoko being Shoko she will probably stay faithful to her enchanted rainbow world of domestic and wild animals, fishes and birds, plants and fruits -- all in adorable guises. Or strollers, crabs, guinea-hen and those full-blooded Malaysian chillies with a pungency and potency of the forbidden fruit!

Yet her horse paintings reveal a new freedom, within and without. As if the reins have broken loose, and an emotional demon of colours has been unleashed. This is Shoko LEE, the weaver of animal fantasies in human guises, at her most extravagant. It coincides with her new ‘freedom’ in real life. Her two daughters are away – LEE Hui-Ling is studying liberal arts in Sarah Lawrence College in New York, and LEE Hui-Lian is an Asean Scholar studying in National Junior College in Singapore.

The linear spaces and lucid colours of her previous works which often evoke innocence, grace and humour are absent in her horse paintings. Here, the strokes are plied on relentlessly and purposefully.

Yet there is a feminine quality in the fluttering mane, in the slender tapering snouts, the gentle eyes – which are further softened sometimes by a boudoir pink hues. Whether the horses are in furious gallop or just doing a jig, the feeling evoked is one of energetic. The horse is shown in threes or more, though often the bob of heads or clash of manes are the only things that mark the numbers.

The other difference between her horse paintings and her previous works is the liberal use of the palette knife. This gives her works a rough-hewn textural quality as opposed to the luminous smooth sheen of her earlier works.

Shoko devised her own bamboo palette knife, carving the tips to get the effect of detailed renditions or broader sweeps. The knife is like a pliant bamboo - to be coaxed and controlled under the right pressure and stroke to create hard and soft forms - and a sense of movement.

Another notable departure is her use of oils. Previously, her main media were watercolours (on cartridge paper), oil on canvas, ink and prints. But why horses and also dragons? She says she became captivated by Chinese zodiac; Shoko painted a full set of lunar animals in 1989 but she was intrigued by horses. And in particular, the zebra.

“I was attracted by the fanciful design of the zebra. It is like a piece of cloth and it reminds me of a Chinese opera mask. It looks so funny, sometimes it is so fat,” she explains. “So many artists have painted horses, so why should I? I wanted something away from the fixed and stereotyped renditions.”

She continues by saying, “I want to paint what I want, not other people’s horses. For me, I have no interest in dead horses – like those of Napoleon on horseback.”Her paintings are like a cascade of colourful and her are shown prancing in an enticing dance of joy, undeterred in the vast expanse of our imagination.

But what about the dragons? Both horses and dragons are beauty and power personified: One is loved and has a free spirit, while the other is held in awe, and is mysterious and magical.

“The dragon is a mythical creature. Nobody has seen a dragon. And the dragon of the Western world differs from that of Chinese mythology. So I decided to paint my own based on Chinese culture,” she says.

She first painted dragons seriously in watercolours and some of these works were displayed in the 2000 Dragon Images exhibition at the National Art Gallery in 2000, which marked the Year of the Dragon. Her present works on dragon horse are all rendered in oil. 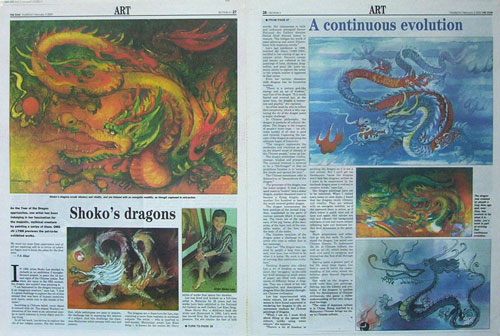 As the Year of the Dragon approaches, one artist has been indulging in her fascination for the majestic, mythical creature by painting a series of them. Ong Ju Lynn previews the yet-to-be exhibited works.

We must not cease from exploration and of all our exploring will be to arrive at where we began and to know the place for the first time. - T.S. Eliot

In 1989, artist Shoko Lee decided to embark on an ambitious if straightforward project: to paint the 12 animals signs of the Chinese zodiac. But when she came to the fifth animal, the dragon, she couldn't stop painting it.

"I am fascinated by the dragon because it is an imaginary creature," says Lee. "I find it a great challenge to capture the chi of this animal that was born of human creativity and, hence, exists only in the minds of humans."

According to Chinese belief, every object is imbued with chi. The closest Western explanation of the word is an universal energy or spirit inherent in every object and living thing.

In all her work, Lee strives to capture the chi of her subject matter. For she believes that, while techniques are easy to acquire, the challenge lies in capturing the essence of a subject. And this challenge the japan-born Malaysian artist accepts with zeal and passion.

The dragons are a departure for Lee, representing a move from realistic to mythical subjects. The artist - who is married to well-known Malaysian artist Lee Kian Seng - is known for the realist My Diary series of works that spans two decades.

Lee (Shoko ) has lived and worked as a full-time artist in Malaysia for 28 years and her works have been exhibited in the National Art Gallery as well Gallery Kian Seng.

Since Sunny Boy, a children's book she wrote and illustrated in 1980, Lee's work has moved from the illustrative to the expressive. Yet she retains the best of both worlds. Her uniqueness in style and technique prompted former National Art Gallery director Datuk Syed Ahmad Jamal to remark: "She bridges the world of easel painting and comic illustrations with inspiring results."

Lee's last exhibition in 1996 entitled My Diary (1989-1993), testified to her coming of age as a mature artist. Nature's energy and bounty are reflected in her paintings of lions, chickens, dragonflies, and plant life. Lee's uncanny ability to capture the comic in her subject matter is apparent in that series.

Even her current obsession with dragons has its humorous touches.

"There is a certain god-like energy and an air of wisdom," says Lee of the dragon. "It is much feared and revered but, at the same time, the dragon is humorous and playful," she explains.

An artist must be able to reflect that complexity, which is why capturing the chi of the dragon poses a major challenge.

"The imagery represents the aesthetics and creativity as well as the shared sense of identity of the Chinese people," sums up Lee.

The dragon symbolises vitality, courage, wisdom and prosperity. The mystical creature is believed to be a "life-bringer" in that its propitious function is to "arrange the clouds and spread the rain."

The Chinese sometimes refer to themselves as "descendants of the dragon."

The dragon incorporates the best qualities of the animal kingdom, manifested in the parts of various animals which it comprises. The claws are of the eagle; ears, of the pig; horns, of the deer; arms, of the tiger; tail, of the crocodile; scales of the fish; and the body, of the snake.

The timeless evolution of the dragon poses a challenge to the artist who tries to reflect that in her paintings.

Says Lee: "The dragon was created by people a long time ago and over time, has evolved to be what it is today. My work is part of reviving that continuous evolution."

Painting dragons also allows Lee a lot of freedom to experiment. Her "struggles," as she calls her draft sketches on small pieces of paper, are filled with experiments of different forms of dragons. They are a blend of her own imagination and description of dragons from the classics throughout Chinese civilization.

Lee has experimented with water colours, ink and oils. She seems to have found enjoyment in rendering her dragons in oils, an uncommon medium for Chinese paintings of dragons.

"When I use oil, I must think about filling in the spaces with colours, unlike using water colours," she explains.

"There's a lot of freedom in painting the dragon as it is not a real animal. But I can't get too flamboyant 'cause the dragons won't look like dragons; neither do I want to be constrained by the textbook dragon since it evolved in creative minds," says Lee.

Her dragon paintings have yet to be exhibited. When I visited Lee's home to view them, I found that her dragons exude vibrancy and vitality. They are imbued with an energetic mobility, as if she captured them in action, as if she's taken a quick slice out of time and space. Her colours are rich and vibrant; the background contrasts of cool and warm colours reflecting light and darkness further lend dynamism to the paintings.

Much preparation and reflection go into her work. To understand the dragon, Lee pored over Chinese classics. To understand the chi in Chinese culture, she took up tai chi, which trains the body and mind to recognise and strengthen the flow of chi through the body.

Her work on the dragons is much more than just paintings. Delving into the history and evolution of the dragons in tandem with the development of Chinese civilisation, she gains a richer understanding of her own unique dual heritage.

"The root of Japanese culture is in China. Being married to a Malaysian Chinese brings me closer to Chinese culture." 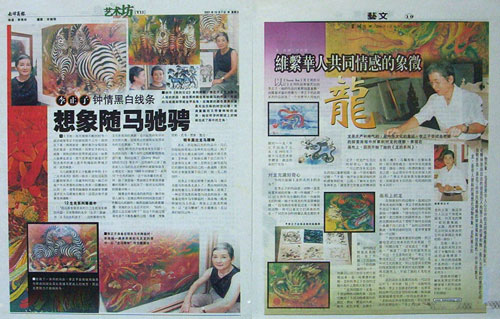